Posted by Francesca Larson on December 01, 2014 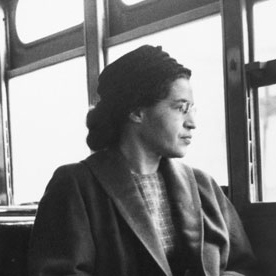 Yesterday marked the 59th anniversary of the start of the Montgomery Bus Boycott.  On December 1, 1955, Rosa Parks was arrested for refusing to surrender her seat to a white passenger.  Rosa Parks sitting on that bus looking out the window is one of the iconic images from the Civil Rights Movement. But in our popular imagination, we sometimes have a distorted view of what that moment actually was—why she did it, what she was thinking, what kind of person she was. Rosa Parks later wrote in her autobiography,

People always say that I didn't give up my seat because I was tired, but that isn't true. I was not tired physically, or no more tired than I usually was at the end of a working day. I was not old, although some people have an image of me as being old then. I was forty-two. No, the only tired I was, was tired of giving in.

Her act of resistance was a tactic that she and other emerging leaders in the local NAACP had already planned and prepared for, as part of their larger strategy to force an end to racial segregation.

Leadership is learned and acquired. A decade before her arrest, Rosa Parks was a youth member of the NAACP, where she served as secretary for her local chapter.  In the 1940s, she worked to organize a campaign demanding justice for Recy Taylor, a black woman in Abbeville Alabama who had been gang-raped by six white men. She also helped to organize actions in response to the brutal murder of Emmett Till in 1955. And four months before her arrest, she trained with other grassroots leaders on non-violent civil disobedience tactics at Highlander Folk School in Tennessee.

Half a century after Rosa Parks, our country continues to need leaders in the fight for social justice. Here at EPIP, our vision is to provide a platform for those leaders. EPIP is a space where people in the philanthropic and social change sectors can connect, learn, and practice some of the skills and values necessary to be effective leaders in building a more just, equitable, and sustainable society.

Last month, we announced a seventh-month applied learning campaign to help highlight these skills and values, as described in EPIP’s Measuring a Leader. In December, we are highlighting the Leadership and Management skill set, which includes:

We’re also highlighting some of the ways that members are demonstrating these skills, such as:

Through the MC MaL campaign, we want to offer a more intentional way for our members to share best practices and tools that come out of this work, while also connecting them to resources from the broader social change community. Here’s how you can participate in December:

The recent tragedy in Ferguson and the failure to bring about a fair and just resolution are examples of a divided community and the lack of equitable leadership practices. Demonstrating leadership, from wherever we operate, can create impact. As a collective, we have an even stronger voice. Share with us what you know and what you've learned. We are each other’s greatest resource. Thank you sincerely for your support and participation.
Leadership & Management Skills MC MaL
Do you like this post?
Tweet