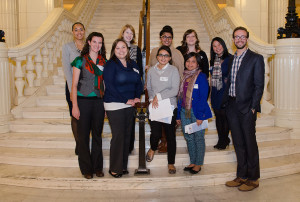 It was not very long after I was hired at Rockefeller Philanthropy Advisors that I was able to experience Emerging Practitioners in Philanthropy for the first time. With barely six months of philanthropy and nonprofit experience under my belt, I was encouraged by my new colleagues to attend the 2012 EPIP Annual Conference in Los Angeles, CA as a way to get acclimated to the philanthropic space and get a handle on just exactly what we were doing and what we were all about. I—being quite wet behind the ears—said “yes!” without even really knowing what I was agreeing to. Conference for emerging philanthropists? Sure, sounds good. Los Angeles? Uh, yeah no need to tell me twice!

All fun in the sun aside, what I experienced at the conference had a pretty big impact on me. Although I had just started my career, I returned feeling energized and excited about what philanthropy is and what my organization was doing in the field. The beauty of the EPIP Annual Conference is that you are exposed to so many different kinds of people in the field: peers, thought leaders, Executive Directors, social justice advocates—it is incredibly hard to leave such an experience without feeling extremely motivated and wanting to change the world in at least some small way. What can I do today? What can I do right now? I want to do it all!

“I joined EPIP because I was looking for a community of like-minded individuals who were at a similar stage career wise. When I joined EPIP two years ago, I didn't think I would help start a Chicago EPIP chapter, but EPIP allows you to dream big and helps you achieve those goals. As a result, we now have a Chicago chapter that will hopefully benefit the Chicago community and broader EPIP national community.”
--Sana Jafri, Northwestern University

I will tell you what I did: I returned to Chicago and immediately tried to find out how to get involved in my local chapter. Only…there wasn’t one. I’m sorry, what? Chicago has no EPIP chapter? What gives? I reached out to EPIP National and was given the “EPIP Chicago Spiel”: there were definitely attempts in the past, but none of them really materialized into anything and the few that did, well, they didn’t last very long, et cetera, et cetera and so forth.

Thankfully, EPIP National made connections with local foundations and leaders and soon, a small group of us started spreading the good word around the city. While building the buy-in for local peers felt very much like we were saying “come on, you really need to join this super cool club!” we were able to successfully raise awareness and excitement about the next EPIP Annual Conference which was to take place in Chicago in 2013. Our small group soon morphed into the 2013 EPIP Annual Conference Host Committee.

“As a member of the EPIP Chicago Steering Committee, I am very excited to represent the nonprofit sector and hope to help enhance communication between the nonprofit and philanthropic communities.”
--Lauren King, Children’s Research Triangle & YNPN Chicago

The 2013 Annual Conference was huge in a number of ways. It was validating to see so many people show up for a conference hosted by a national philanthropy organization that had no local chapter, and it was even more exciting to be so well-received, so encouraged, respected, supported and cared for by the chapter members from around the country who were attending the conference. But most importantly, the conference was huge for Chicago because at the closing plenary, to a room-wide standing ovation, we announced that Chicago would be EPIP’s next official chapter, and this time we were here to stay.

“At one of the first meetings that we had (sometime in June 2013, I think), I remember coming back from the event completely energized by the conversations that I had. It was so refreshing to talk to young professionals in philanthropy who share the same concerns as I did.  This was when I realized how much energy there is to move this forward, and how much I would love to be part of this vast learning network.
I am really excited with what we have in place for programs this year, and hopefully we'll be able to engage our Chicago members in issues that they care about.”
–Hafizah Omar, D5 Coalition

And so here we are. Almost exactly a year later, the same Conference Host Committee has morphed into our Steering Committee, with the addition of a handful of new, fresh exciting additions. Everyone around the table—which contains seats for nine diverse, talented and motivated individuals—has a unique story about what EPIP means to them. Through these unique stories and views, we will shape and mold our brand and let that guide the way we think about programming and services we want to provide to the Chicago community. While Chicago has excellent resources for new grantmakers and new young nonprofit professionals, there are still some gaps. It is our goal to be the resource that fills those gaps.

"EPIP provides a visible platform for young professionals to express ideas, share resources, and explore solutions for responsive philanthropy to have a greater impact for everyone involved - grantmakers and grant seekers alike. Every time we meet and discuss a new idea, I get excited about the possibilities. Philanthropy has the power to change lives - EPIP allows me to become an informed part of the solution."
--Cheyenne Cochrane, Chicago Debate League