New Orleans was the perfect location for EPIP to convene. As one of the opening panelists poetically described, New Orleans is a city that is dealing with the disaster of inequality that hit the shores of Louisiana over 100 years ago. Katrina's devastation has provided a reminder of systemic inequities - and the opportunity to create new paths for creative problem solving, civic engagement and community building - and collectively figure out solutions to new challenges including the preservation of the city's vibrant communities and combating gentrification. Center stage is movement building around the issue of institutionalized and systemic racism.

The conference sessions were based on three program tracks this year - Place Based Funding with an Eye on the South, Social Justice and the Arts, and Strategies for Collective Impact. I participated in many of the discussions around collaboration and community building through the arts.

Tuesday was an all-day session for chapter leaders. Most of the 12 EPIP chapters were represented, many from the North East. We ran through workshops on diversity and understanding - story telling and listening. Some of the workshops could be replicated in Chicago. The most valuable part of that day was the chance to share the work happening in each chapter - everyone was really excited about our tool-kit series and how we are applying Measuring a Leader around a local context. I mentioned that the Chicago chapter would be packaging the program into a "how-to" manual in the fall after our third workshop. It was energizing to hear everyone's excitement for us.

Later that evening there was a reception for all members with a great brass band and a chapter leader dinner - which was UNREAL. We walked down Bourbon street (which is mainly a tourist place) and landed on Frenchman Street where we sat on a balcony and listened to music late into the night and talked. 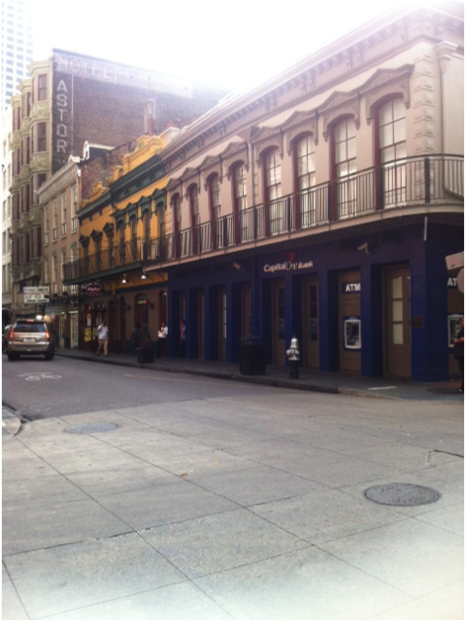 Wednesday was really packed programmatically. The day started with an opening panel with Flozell Daniels - the CEO of Foundation for Louisiana - formerly the Louisiana Disaster Relief Fund, and Allison Plyer the CEO of the Data Center and other public policy experts. The session grounded the conference around how philanthropy can deal with systems of inequity using the context of post Katrina New Orleans. We talked about the role of data in building a case for policy development around preserving communities after the hurricane. Since so many people (low income African American) left the city - a major challenge has been dealing with how to combat issues of gentrification as more middle-income white people move in. Policy development depends on data collection - pre Katrina the city was 66% African American  - today 10 years later it is 60%. But the big takeaway from this panel was that the data is only as powerful as the story. When dealing with tremulous histories and the time honored practice of oral story telling - building a case for cultural policy requires a bridge between the quantitative and the qualitative. This struck a chord with me as foundations have become so data obsessed - I worry we are at risk for losing our own organizational languages.

One of the breakout sessions I participated in was called People Place and Planning: Engaging Residents and Using Data in Revitalization - which focused on an effort funded by the Wells Fargo Regional Foundation in Wilmington. We went through a planning/resident engagement scenario through role-playing. I was the planning consultant - which was a total hoot. It was really good facilitation practice - corralling all the folks around the table to come together around prioritizing the development of solutions to serious neighborhood problems. It made me think about ways to get more involved in Pilsen or a future in community organizing. Another workshop I participated in looked at a collaborative model in Boston funded by Hunt Alternatives that supports the network of 30 youth arts education organizations. The grant helps bring leaders from the organizations together to develop collaborative structures like sharing funders, operational resources and public awareness of programs

After a really short break we all walked to The Rusty Nail for food truck dinner - and drinks of course. I met so many interesting people - including Kyle who worked in South America with Teach for America before moving to New York. He knew a lot about the school system issues that faced New Orleans following Katrina. I learned that after the storm the city closed all the schools and implemented a charter system. The charters let go of their teachers - which happened to be many black middle class residents - and brought in Teach for America. This of course has contributed to the city's distrust of outsiders.

Wednesday night I hung out with other chapter leaders and bounced through many of the best NOLA jazz bars. We danced like crazy to the best music I have ever heard which takes place everywhere by the way. It's not an exaggeration.  After a late night shrimp po boy we finally made it back to the hotel with enough time for a short nap before the morning's programming. (grin) 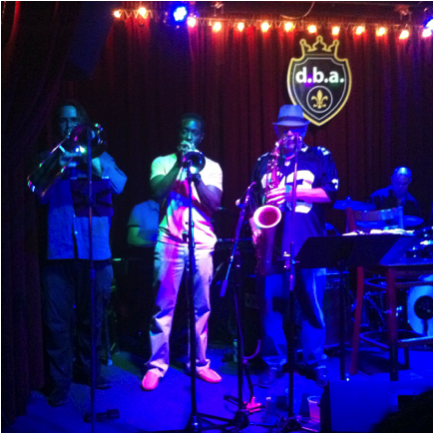 The Thursday AM Plenary was the emerging leader salon - a reoccurring program at EPIP conferences. The format was a plenary panel of four senior level executives in philanthropy who tell their personal leadership stories. Break-out sessions follow which give conference attendees a chance to have an intimate conversation. It was really valuable. The plenary was moderated by Rahsaan Harris who was quite funny, engaging and charismatic. I was really inspired and interested in the work of Linetta Gilbert - the "mother of a movement" - and chair of the Foundation for Louisiana. Linetta worked as a senior program officer at the Ford foundation for a decade. Her breakout session referenced practices we have touched on regarding connecting values to career. She talked about how philanthropy is re-tooling - that issues around social justice are again up for conversation and that we have more assets and resources than in the past. All these factors have created an interesting moment to work in philanthropy. She told us to always look at an issue from the standpoint of the local level, stretch yourself, recognize that our jobs are to be talent scouts - err on the side of the person who has a good idea.

The second breakout I attended was with Flozell Daniels - who shared with us the difficulties he faced when he took over the Foundation for Louisiana as executive director. His session addressed managing up, developing confidence, prioritizing, and walked us through developing a team based leadership practice and placing (your) foundation as part of the non-profit ecosystem - not separate. He talked about soul searching from a values perspective when thinking about career pathways.

After our lunch plenary - another incredible panel - we broke into smaller groups for our learning tour. I was given the last spot in the arts and culture tour - which was by far the best part of the whole conference experience. We walked through Congo Square park and heard from a local cultural leader - Chief Shaka Zulu of the Yellow Pocahontas Mardi Gras Indian Tribe. Shaka shared with us the incredible history of Congo Square, an open space within Louis Armstrong Park, which is located in the Treme neighborhood of New Orleans, just across Rampart Street north of the French Quarter.  This neighborhood is famous for its role in the development of African American music and culture. More about Congo Square here:http://en.wikipedia.org/wiki/Congo_Square
The stories that Shaka shared with us were unbelievable.... I'm still reflecting on all of it. 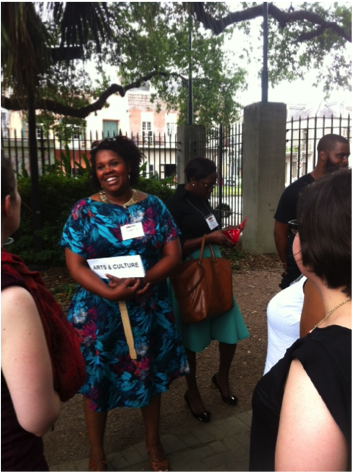 All in all I think the conference was really special because I was able to make close connections to many of the steering committee members from other chapters. It was a really inspiring experience and I feel very thankful to have had the opportunity to go. Another time I'll tell you about the pet snake - the trumpet player and the feathered suits...