Posted by Francesca Larson on November 24, 2013

This post appears here as part of the EPIP-JAG blogging partnership, “Wit and Wisdom”.   This year’s Hispanic Heritage Month prompted those of us at Emerging Practitioners in Philanthropy to dig a little deeper into our history and acknowledge EPIP’s Latino roots and the contributions made by the Latino community to the field of philanthropy. Many don’t realize that people of color were at the center of EPIP’s formation. 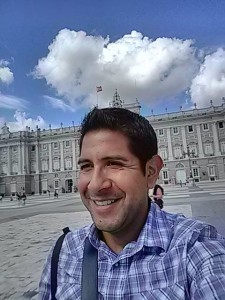 Alejandro Amezcua[/caption] Most know the story of how Rusty Stahl founded EPIP with a group of like-minded people back in 2001. However, EPIP’s staff recently discovered that one of Rusty’s compadres was a Latino Program Associate from the Charles Stewart Mott Foundation, Alejandro Amezcua. END_OF_DOCUMENT_TOKEN_TO_BE_REPLACED

Alejandro and Rusty worked to bring the idea of EPIP to fruition. A recent conversation with Rusty revealed the story:

Alejandro Amezcua was a Jane Adams fellow a year after me at Indiana University and we went together to the the Council on Foundations conference [in 2000]. The next year I was at Ford, Alejandro was at Mott. And Alejandro and I said, "Well, last year we felt really weird and isolated at [the] conference. This year we're going not as students but as grantmakers from these two big national foundations. Let's convene the dinner for the young people who we meet there".

Those were the humble beginnings of EPIP (thanks to the support of Elan Garonzik and Linetta Gilbert who mentored them both). Today, Alejandro is an Assistant Professor of Entrepreneurship at Syracuse University, where he completed a doctorate in Public Administration and an MPA in Management, Entrepreneurship and Innovation. Latinos add to the richness of American culture and they are vital members of our communities. However, organized philanthropy still struggles to engage Latino organizations and community members. We are thankful that recent research recognizes the need to understand relationships among Latinos, communities, and philanthropy. Aida Rodriguez‘s report, commissioned by Hispanics in Philanthropy (HIP) as part of their GameChanger series in 2011-2012  “Foundation funding and Latino community priorities: gaps and opportunities", explores this topic. Dr. Rodriguez notes that “funders are aware of the needs of Latino communities and their institution’s lack of an appropriate response to these needs, but they cannot seem to fully direct their grantmaking where they know the most need exists.” Diversifying institutional philanthropy with Latino staff, executive leadership, and trustees and engaging Latino thought leaders to develop foundation strategy would build organizational capacity to address community needs. As a 2011 study from the Foundation Center reports:

"Over the past decade, U.S. foundation giving explicitly designated to benefit Hispanics and Latinos has held steady, comprising about one percent of total foundation funding, even as the Hispanic population in the U.S. has grown significantly over the same period. [note] This figure does not represent all foundation giving benefiting Latinos, for which good estimates do not yet exist."

Michelle Jaramillo & Marisa Aurora Quiroz[/caption] We hope foundations begin to intentionally engage thought leaders like Prof. Alejandro Amezcua of Syracuse University and support local leaders like EPIP members Michelle Jaramillo and Marisa Aurora Quiroz. They recently established a Latina giving circle in San Diego to honor the unique contributions of Latinas in their binational region. Michelle tells the story of the group's formation and the significance of the legacy she represents:

An EXCEPTIONAL group of women [...] launched the Latina Giving Circle of San Diego. The excitement in the room and the resulting response from the women convened was affirmation; a testament that this needs to be born. I am feeling so grateful [...] to the woman who started it all, at least for me personally, mi mama. All I am and all I give to the world I owe to my parents and especially in this case, my mom. She has faced tremendous adversity in her life but throughout it all she has proven que 'si se puede.' She has relentlessly reminded me of not only the talents and gifts I can bring to bear in service of others but also of my responsibility to do so; to act with compassion and care for those around me, those who I know and those who I don't because we are well when we all do well.

Michelle and Marisa attribute their inspiration and success to the knowledge and support they’ve gained through EPIP and their local chapter, EPIP San Diego, which has strengthened their efforts throughout the community. EPIP hopes to honor our diverse history by highlighting our members as innovators and celebrating their distinct talents and backgrounds. Our move to the Centre for Social Innovation, recent People of Color Network Gathering at Harvard and the upcoming June 2014 Unity Summit in Washington DC in partnership with JAG aim to fulfill those goals. #DoGood Rahsaan Harris, PhD Executive Director Emerging Practitioners in Philanthropy (EPIP) Wit and Wisdom is a blogging collaboration between EPIP and JAG. Featuring a monthly entry from individuals within our networks, it highlights thought leadership about philanthropy, racial/social equity, and multigenerational change. Its lightening-hot interviews, essays, and case studies aim to provoke insightful discussion. We hope you will engage!