Beans, Cornbread, and the 2014 NFF State of the Sector Report

This post was authored by Trish Tchume, Director of the Young Nonprofit Professionals Network (YNPN), and originally appeared on the YNPN Blog.

If you’re like me, you read through the 2014 Nonprofit Finance Fund State of the Sector report and breathed a sigh of relief. Not because the 2014 report paints a particularly rosy picture of where we are as a society and as a sector, mind you, but because the results of the 2009 survey are still seared into so many of our memories.

Yeah, you remember that survey–the one that spelled out so plainly what all of us were experiencing in our neighborhoods and our organizations: soaring demand for critical services (93% of organizations providing these services reported an increase in need) and plummeting resources (62% and 43% of organizations braced for foundation and government funding cuts respectively). The majority of respondents planned to operate at a deficit that year. Those were some pretty dark days, friends.

And like I said, it’s not that the 2014 report is calling for 7 days of high temps and sun. 80% of this year’s respondents are still anticipating increased need for their communities. But far fewer are operating at a deficit and the year over year comparison shows that funding prospects are essentially expected to remain level. So, while we’re at a place where we’re no longer in freefall, the sense memory of the freefall is still pretty acute.

What better time to have real conversations about the relationship between funders and grantees?

As you know from past posts, YNPN and EPIP have made a commitment to advancing the conversation about the power dynamics that exist between funders and grantees. We call this the Beans & Cornbread convo as a reference to the Louis Jordan & Tympany Five song about things that go together but sometimes just can’t get along. Rahsaan and I have been open about the fact that we don’t exactly have a 12-step plan for “advancing the conversation” but we do have a strong, shared desire to actively and thoughtfully experiment. 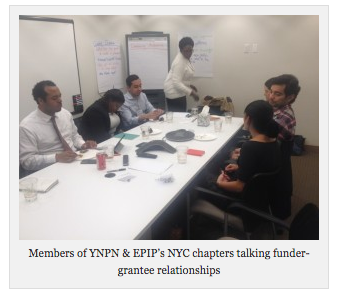 Over pizza and snacks, facilitator Lucretia John (formerly of the Funding Exchange) guided the group through some introductory questions about identity, hopes, and fears for the conversation, then opened up the floor for participants to reflect on three basic questions:

As you can imagine, the responses to these questions raised even more questions. More importantly, early feedback tells us that the experience also highlighted the shared identities, goals, and attitudes of folks in the room, as well as an eagerness to learn more about each other and how we can use these stronger relationships to change how power plays out in social change work.

This is great news for the vast majority of this year’s NFF respondents who reported that they can’t have real conversations with their funders about anything other than expanding programs. And we all know that it takes more than that to build stronger communities.

You’ll be seeing a fuller synopsis of the pilot conversation and plans for next steps soon. In the meantime, check out the NFF Report and tell us in the comments below where you’re seeing signs of hope or how you think we should continue the conversation.