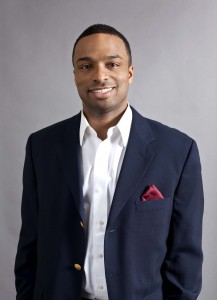 Rahsaan K. Harris has been selected as the Executive Director of Emerging Practitioners in Philanthropy.

“Rahsaan’s experience in the nonprofit and philanthropic sector will serve the organization well as we harness the potential of emerging professionals to create social change,” said Trista Harris (no relation), EPIP Board of Advisors Chair and Executive Director of the Headwaters Foundation for Justice. “His laser-like focus on strengthening the value proposition of EPIP, and amplifying the voices of our members, will take our work to the next level.”

Upon accepting the position, Mr. Harris noted, “Continuing to expand our membership, and the leadership development opportunities we offer members as they advance in their careers, will truly create a powerful force for the field and for social change. I am looking forward to building on the great foundation that has been developed over the last decade.”

Mr. Harris received his doctorate in Public and Urban Policy from the New School University in New York City. His dissertation examined the philanthropic influences and interests of African-Americans. Rahsaan holds a Masters in Management from NYU and a Masters in Education from Columbia University. He attended Princeton University, and served as a Peace Corps Volunteer in Uruguay.

A member of EPIP since 2009, Mr. Harris serves as Board Chair of the Foundation for Research on Sexually Transmitted Diseases. He is a member of the Council on Foundations Professional Development Committee, and has been a Connecting Leaders Fellow with the Association of Black Foundation Executives (ABFE) and an American Express NGen Fellow at Independent Sector.

Rahsaan led diversity and racial equity initiatives as a program executive at The Atlantic Philanthropies, an international foundation with assets over $3 billion. During his seven years at Atlantic, Mr. Harris managed the foundation’s response to the Haitian earthquake; oversaw grants to community groups in Bermuda; and supported the CEO on spend-down planning, discretionary grantmaking, and high-engagement grantmaking practices. Prior to Atlantic, Mr. Harris was Executive Director of Playing2Win, the nation’s first public access technology learning center serving inner city, low-income residents.

“We want to ensure that EPIP is sustainable and well-supported during this critical executive transition as we complete our founding phase and move into our next stage.” said Board Chair Trista Harris. “I am so appreciative of the generous support of the foundations investing in this crucial Campaign.”

Mr. Harris succeeds Rusty M. Stahl, Founder and Executive Director since 2002. Rusty announced his departure in February of this year and will conclude his term this month as he reaches his 10-year mark. Mr. Stahl, who will serve as an advisor to Mr. Harris, stated, “In light of Rahsaan’s involvement in EPIP over the years, his substantial contributions to philanthropy, and his deep knowledge of our field, I am delighted to pass the torch to my brilliant colleague and to support his leadership.”

Founded in 2001, Emerging Practitioners in Philanthropy develops extraordinary new leaders for foundations and the communities they support. Its guiding principals emphasize the value of multigenerational learning, professionalism and effectiveness, and social impact to build a more just, equitable and sustainable society. EPIP has over 600 diverse members from 35 states and 12 robust chapters. The EPIP community offers members valuable peer support, professional development, and a voice in shaping the future of organized philanthropy. Program offerings include orientation to foundations and grantmaking for social change; career coaching; support for emerging leaders of color; tools for supporting grantee talent; and the premiere conference for the next-generation of grantmakers.

Headquartered in New York City with an office in the Bay Area, EPIP is a project of the Tides Center, and partners with Council on Foundations, regional associations of grantmakers, affinity groups, academic centers and numerous sister organizations. For more about Rahsaan and EPIP, visit epip.org.

Rahsaan Harris has over 10 years of experience working in Philanthropy and Non-Profits at a major foundation and two community-based organizations. Additionally his experience includes teaching high school and serving as a volunteer in the Peace Corps. His expertise is in grant-making, organizational assessment, diversity and teaching and he has strong consulting, facilitation and fund-raising skills and is fluent in Spanish. Mr. Harris holds a doctorate in Public and Urban Policy from The New School in New York City.

From 2003 until December 2010, Mr. Harris worked as a fellow and Program Executive at The Atlantic Philanthropies, an international foundation with assets over $3 billion. At Atlantic, he led diversity and racial equity initiatives and worked across Atlantic’s Ageing, Children & Youth and Reconciliation & Human Rights programs in the U.S., with an explicit focus on integrating social justice principles into grant-making. He managed such initiatives as the foundation’s philanthropic response to the Haitian Earthquake and oversaw annual grants of $2 million to promote social justice outcomes for youth and older adults in Bermuda.

Before joining Atlantic, Mr. Harris served as the Executive Director of Playing2Win, one of the country’s first public access technology learning centers to be established in an inner-city, low-income area. During his career, he has worked as an educator, helping both youth and adults develop skills that allow them to create better opportunities for themselves. Prior to Playing2Win, Mr. Harris received a fellowship from the Open Society Institute of the Soros Foundation to work with HarlemLive (www.harlemlive.org), a web-based publication run by Harlem teens. The focus of his fellowship was to create and implement a plan for the organization’s growth and sustainability. Before HarlemLive, he taught science in New York City public schools between 1997 and 2000 and served as a Peace Corps volunteer in Uruguay from 1995 to 1997.

Mr. Harris received his doctorate in Public and Urban Policy from the New School, where his dissertation was on understanding how socio-economic diversity in the African-American community affects their philanthropic interests. He also holds masters degrees in Management and High School Science Education from New York University and Columbia, respectively, and a Bachelor of Arts from Princeton University.

Mr. Harris has received numerous leadership awards including selection to the Association of Black Foundation’s (ABFE) 2005 Connecting Leaders Fellows Program and selection as an American Express NGen Fellow in 2009. He received the Notre Dame University Science of Generosity Dissertation Fellowship for graduate students conducting research on the topic of generosity. He is also an active volunteer in his community.

He is a Board member of the Upper Room AIDS Ministry and FROST’D (the Foundation for Research on Sexually Transmitted Diseases); a member of the Council on Foundation’s professional development committee; an advisor to the board of FC Harlem, Home of Harlem Youth Soccer; and is a Big Brothers Big Sisters mentor. He also volunteers as a research fellow at the Twenty-First Century Foundation and participates on New York Blacks in Philanthropy’s leadership team. He is a class agent for Princeton University’s Annual Giving campaign.

Our previous announcement about the Executive Director transition

January 27, 2012 -- Emerging Practitioners in Philanthropy (EPIP) announces that Rusty Stahl, Founder and Executive Director, will complete a ten-year tenure marked by innovation and impact at the end of summer 2012. EPIP has engaged The 360 Group to manage a search for the next executive. To ensure that EPIP is sustainable and achieving its goals during and beyond this transition, we launched The EPIP Funding The Future Campaign, which has secured nearly half of a $1.6 million goal in commitments to provide three years (2012-2014) of baseline operating support.

EPIP engaged consultancy TransitionGuides to support planning for the executive transition, which Rusty and the EPIP Board of Advisors ("Board") began planning during strategic planning in 2010. The Board established a Sustainability and Succession Planning Committee that was chaired by Board Vice Chair Trista Harris and composed of Chair James Weinberg, Common Good Careers; Development and Communications Chair Michael Shaw, Coalition for Lead Safe Homes; At-Large Board Member Christi Tran, Blue Shield Foundation of California; and Board Chair Emerita Melissa Johnson, NAACP.

EPIP has a strong staff team that includes Rebecca Schumer, who has served as Director of Membership and is being promoted to Deputy Director; and Kate Seely, who has been a part-time consultant and will join the staff full-time in 2012 as Director of Field Operations.

Sterling Speirn, President, W.K. Kellogg Foundation, a major supporter of EPIP, stated: "Under Rusty's leadership, Emerging Practitioners in Philanthropy has provided tremendous benefit to the philanthropic community. Kellogg Foundation is committed to building the next-generation of talent that is being developed through EPIP, and we encourage other funders to join us in this effort."

EPIP Board Chair James Weinberg states: "Rusty Stahl's vision and social entrepreneurship created EPIP from scratch. His enduring leadership enabled it to grow from a start-up into a mature and valuable organization. I am incredibly proud of the progress Rusty has spearheaded. And I am thankful to my Board colleagues for designing a thoughtful transition plan that allows Rusty to make his next professional contribution while EPIP builds on his legacy and continues to innovate and grow into its second decade." EPIP Board Chair-Elect Trista Harris said "On behalf of the Board of Advisors, we thank Rusty Stahl for a decade of service to the next-generation. I helped to initiate EPIP Minnesota Chapter, and I came up professionally through EPIP. Rusty was a mentor and great support in that process. We look forward to working with him and our next executive to ensure an effective transition and continue growing EPIP's unique value proposition well into the new century."

EPIP is a national membership association of young, new and junior foundation professionals and trustees, as well as graduate students studying the field. EPIP's mission is to develop new leaders for foundations and the communities they impact. It offers unique peer-to-peer and multi-generational leadership development focused on foundation effectiveness and social impact. EPIP has chapters in New York City, the San Francisco Bay Area, Washington, DC, Los Angeles, Michigan, San Diego, Philadelphia, Indiana, Boston, Minnesota, and Seattle. These chapters are run by nearly 100 local volunteer leaders. Major support for EPIP, which is a project of Tides Center, has come from the Ford Foundation and Charles Stewart Mott Foundation in addition to other funders, members' dues, and fees for service.

According to an EPIP-commissioned study by Putnam Community Investment Consulting, highlights of EPIP's impact during the past decade include:

The EPIP Board and staff look forward to working with you to continue providing uniquely valuable programs and services to the field.